Ballet in Print: Where Snowflakes Dance and Swear, which I originally posted about just over a year ago, is now available in paperback! Currently priced at $24.99, the price will increase by one cent on 1/31/13 to $25.00 in order to qualify Amazon customers for snazzy free shipping. If you missed this when it was first published, don’t pass it up again! 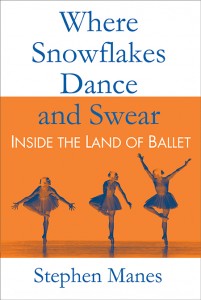 Are you looking for the must-have dancer gift (or self-gift!) this year? Look no further! Hot off the presses, Where Snowflakes Dance and Swear: Inside the Land of Ballet is possibly the most readable and informative non-fiction book on ballet company life available today – making it an absolute Must Read for aspiring ballet dancers.

Celebrated author Stephen Manes brought his finely-honed talents into the dance world by spending an entire season with world-class company, Pacific Northwest Ballet. Immersing himself in the microcosm of ballet business, Manes brings this experience to life for ballet fans everywhere through his latest book.

Deliciously written, Manes deftly captures the dance-world drama and ballet bustle that make it the fascinating industry that we love – without squeezing the life out of the art and distilling it to a protracted history lesson (ahem, Apollo’s Angels, ahem). The book starts with a bang and dives right into an intimate look into the professional path of Artistic Director Peter Boal, a narrative which does not disappoint in its insight and charm. Throughout, Manes allows the reader to sit alongside Boal as he juggles budgets, dancers, casting, unions, choreographers and somehow, time. Read: Invaluable insight for an aspiring dancer into the mind of an AD!

The reader also walks alongside dance luminaries like Carla Korbes, Christopher Wheeldon and Twyla Tharp as well as lesser-known – and lesser-appreciated – professionals like stagehands, musicians and apprentices. The daily lives and struggles of these myriad artistic talents unfold to reveal a full spectrum of professional accomplishments and frustrations, illuminating the realities of life in ballet, for better or worse.

This book is nothing short of everything a non-fiction ballet book should be. You don’t want to be the last dancer to discover Where Snowflakes Dance and Swear!

Dancing Across Borders is the story of a young Cambodian dancer plucked from his home in a small fishing community to be trained at SAB. If you haven’t seen it yet … go watch it right now! This film is one of my new favorites, if only for the much-deserved coverage of Black Swan set coach Olga Kostritzky, one of the best teachers I ever had (as one of my level’s main teachers at the 2001 Rock SI), and for the extensive footage of Balanchine style and choreography, since there’s isn’t a ton of the stuff on DVD.

But there is much more to this film than footage of SAB teacher-gods like Ms. Olga, Jock Soto and Peter Boal. It is the story of Sokvannara “Sy” (pronounced “See”) Sar, a young man with a remarkable spirit who is plucked from his home country and thrust into the world of pre-professional ballet training by the hand of an intentionally benevolent (though perhaps difficult to like) New York socialite Anne Bass.\

This film might as well be dedicated to honor international ballet students everywhere, as it does an excellent job of talking openly – often through Sy’s own words – about the inevitable emotional consequences of being so far from your home, your family, your language and everything you’ve known. In this case, the scarring was exacerbated by Sy’s lack of control over his fate for the first few years of his training. Unlike some international students, he did not really choose to leave his country for ballet training, ballet chose him. He knew it was a chance to support his family that he couldn’t possibly turn down, though he neither spoke English nor had seen ballet before Bass brought him a ballet film and radically suggested that he leave everything he’d ever known for this bizarre, western pursuit.

Sy’s journey is simply fascinating. He was entered into the Professional Children’s School for academics but was not instantly accepted to SAB despite the pleas of Anne Bass to Peter Martins. Instead, Sy falls into the singularly capable hands of Ms. Olga, who takes on the task of molding the 16-year old Cambodian through private classes from basically a pedestrian into a SAB-level phenom. You’ll have to watch the film to find out what happens from there, but suffice it to say his future would include a little town called Varna.

Dancing Across Borders is available streaming on Netflix and can be purchased, along with t-shirts and posters, at the official site. Proceeds from the official shop go directly towards Nginn Karet Foundation for Cambodia’s “Give a Future to a Child of Angkor”, a program that helps children fulfill their dream to follow in the footsteps of dancers and musicians seen on Angkor Wat and other ancient Khmer temples. Please consider making a purchase from the Dancing Across Borders official shop.

Spoiler Alert! I noticed that the Washington Post article that I linked above mentions rather forebodingly that Sy quit PNB recently. I didn’t want you left hangin’ on where he is now so I did some searching, and it appears from Saint Louis Ballet’s facebook page that he will be joining them for the Spring 2011 season.

$10 Off Your First Order

Error: Twitter did not respond. Please wait a few minutes and refresh this page.